2013 RRHOF Induction Ceremony – Okay. Sing the following couplet to the melody of The Eagles’ “Hotel California”:

HBO’s taping of the 2013 Rock and Roll Hall of Fame Induction started nearly 50 minutes late. Randy Newman was scheduled to be the first inductee on Thursday evening, April 18, 2013.

But, as all in attendance later found out, his good friend and longtime musical admirer Don Henley was stuck in traffic. It was getting close to 8pm and the taping was scheduled to begin at 7pm. Exasperated producers turned up the stage lights at the Nokia Theatre and let Randy rip into a brilliant version of his “I Love L.A.”. Newman had Tom Petty, Jackson Browne and John Fogerty all wailing away on guitar with him. Petty was in particularly good voice and Fogerty knifed a razor sharp solo. An auspicious beginning, indeed. The lights went dark, Newman got up from his piano, straightened his tuxedo and went back to his white-clothed table in the orchestra pit in front of the stage. Only then did Don Henley appear at the lectern. He sardonically noted that he, too, “loved L.A.” “It took me 90 minutes to get here.” He drew the biggest laughs of the evening until erstwhile stand-up comedians Dave Grohl and Taylor Hawkins of The Foo Fighters showed up to close out the ceremonies with their induction speech for Rush.

Speaking of Rush, they were far and away the main reason 5,000 of the 7,000 fans showed up in the cavernous, cold and dark Nokia Theatre. For nearly five hours, my wife and I were surrounded by late forty-something/fifty-something beer-swilling white guys in black Rush tee shirts who screamed at the top of their lungs when anyone on stage even uttered the band’s name. Yes, their female companions might have come to shimmy to Jennifer Hudson’s rendition of the posthumously
inducted Donna Summer’s “Bad Girls.” But, their guys were all about Geddy Lee, Alex Lifeson and Neil Peart. An often overheard
comment that night was: “It’s aboot f—kin’ time they got in. Rush ROCKS!!!

Okay, since this was L.A., allow me to go “Joe Friday” on you and give you just the facts, ma’am or sir:

In closing, what did Cleveland gain by having the 2013 Rock and Roll Hall of Fame Induction Ceremony staged in Los Angeles? There weren’t any more satellite trucks emblazoned with internationally known media brand names parked outside the Nokia Theatre than I’ve seen outside the Waldorf Astoria in New York City or outside Cleveland’s Public Auditorium. As Huey Lewis And The News crooned in “The
Heart Of Rock And Roll,” in L.A. they do it with a lot flash—and indeed they did. The event had undeniable star voltage. It was likely easier and less expensive to get the Oprah Winfreys, Ushers, Jennifer Hudsons, John Mayers, Cheech Marins and Kelly Rowlands of the world to leave their Malibu/Pacific Palisades/Santa Monica
digs and drive to downtown L.A. than it would have been to cajole them into coming to Cleveland.

The Nokia
Theatre certainly made a big wad of cash. I hope the Rock and Roll Hall of Fame & Museum got a cut. Hundreds of seats no closer than 50 yards away from the stage went for $750 a person and thousands of seats more than 150 yards away from the stage cost $500 a pop. But, it was just another yawn of a spectacle for L.A. The ceremony didn’t even make The Los Angeles Times until Saturday, April 20th…and even then it was buried in the Calendar section. In Cleveland, the Induction Ceremony is front page, above-the-fold news the very next morning. In L.A., not so much. It’s about The Clippers, Kobe’s tweets, the other glamorous sports franchises and “The
Business.”

Finally, Jann Wenner didn’t do the Museum any favors with his barely concealed
mocking of its location. In his opening address to the Rock Hall Induction Ceremony this year, Wenner rolled his eyes and said: “let me explain to you why The Rock and Roll Hall of Fame is in Cleveland.” There was a fluttering of derisive laughter throughout the massive hall. Wenner went on to say, in essence, “it’s in
Cleveland because Ohio was willing to pay for it.” He tried to take the negative edge off that comment by then encouraging attendees to make the trip to Cleveland to check out the Museum’s fabulous collection. “You’ve got to come there to see it,”Wenner stated as he closed.

What the West Coast and Canadian Rush fans don’t realize is that Cleveland helped
popularize the very rock music they love. As Chuck D might snort, they are IGNORANT of the music’s history. Rock and roll would have happened, but it would have happened much later without visionary pioneers like Alan Freed who bravely helped “break down those categorical walls” between race music and pop music in the same era in which Jim Crow plagued the nation. 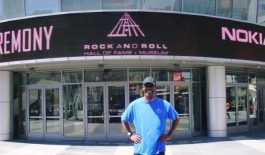 Rock ‘s commercial popularity came to the sunny beaches of California and the dank
clubs of Seattle much later than the scene that happened on the North Coast. In the early fifties, Clevelanders enthusiastically embraced the music. They simply loved it. And, the rock and soul musicians knew it, making the City By the Lake a must-play venue for artists from Elvis Presley to Otis Redding. Cleveland and all of Ohio need to STOP seeking validation from the East Coast/West Coast cultural elites and embrace the Museum for what it is: the very best collection of musical artifacts of the most popular music in the entire world.

In fact, we need to expand The Rock and Roll Hall of Fame & Museum. We’ve been packing in the memorabilia from legendary artists for nearly twenty years now. Have you been in the Museum lately? It’s getting a little close.

I didn’t know Huey Lewis And The News would be my muse for this piece until
I started writing it. But, it’s my contention that the “heart of rock and roll is still beatin’…in Cleveland.” L.A. can mock, but Cleveland still rocks.