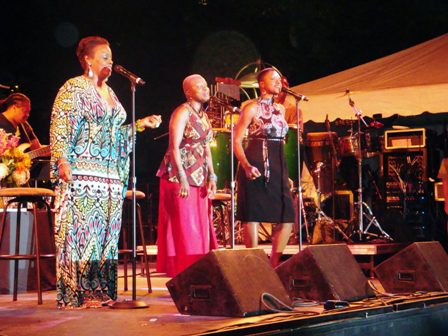 If it’s the Labor Day Weekend, you know where Jack Marchbanks and his better half, Alice Flowers, most likely are: The Detroit Jazz Festival. For the fifth consecutive year, Jack covered this largest free jazz festival in the world for his hometown NPR affiliate, 90.5-FM WCBE Columbus. And, although a nasty thunderstorm forced the cancelation of the Saturday evening concerts on September 3rd, the 2011 edition of Detroit Jazz Festival, or “DJF” as it is affectionately called by Motor City jazz fans, was still a solid success. Acclaimed bassist Christian McBride quipped that DJF is “Jazz Disneyland.” Jack riffed on McBride’s quip and said the term “Jazz Disney World” is a better handle for the event. Yet, unlike Disney World, where a four day pass will set you back around $220 a person, the Detroit Jazz Festival is free to all those who want to take in the great music in downtown Motown over an extended four day Labor Day weekend (Friday through Monday).

Jazz drummer Jeff “Tain” Watts was anointed the 2011 DJF’s artist-in-residence. Given that The Drum is the universal instrument, DJF Artistic and Executive Director Terri Pontremoli noted a poetic synergy in naming Watts artist-in-residence. A complementary theme woven through the 2011 DJF was “We Bring You The World.” Jazz remains America’s most treasured cultural export and attracts artists to this nation from all over the globe. The 2011 Detroit Jazz Festival featured performers from Western Europe, Japan, Korea, India, South America, the Caribbean and, of course, the home of The Drum, Mother Africa. As Benin-born jazz/world music superstar , Angelique Kidjo, joyously reminded the crowd during her Sing The Truth! performance of “Ashe, Mama Africa” with Detroiter Dianne Reeves and Lizz Wright:

“I’ve been singin’ in your language. Sing along with me (in Swahili) now! When you think about it, aren’t we ALL Africans?”