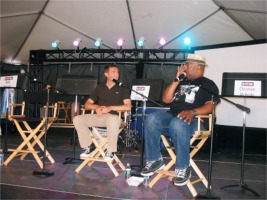 WCBE’s (90.5-FM Columbus, Ohio) “jazz ambassadors” represented the station well at the 2010 Detroit International Jazz Festival. Happily continuing my tradition of covering the event “live” since *Jazz Sunday* host* K.C. Jones* tabbed me as a co-host in 2007, I took in three full days of the three and one-half day jazz spectacular, reporting by telephone to Jazz Sunday guest host *Wayne Self* on Sunday, of course, September 5th. My Jazz Sunday co-host , *Gail Burkholder*, was in Detroit on Friday night to witness Tower of Power heat up the cool Motown evening with a scorching set. 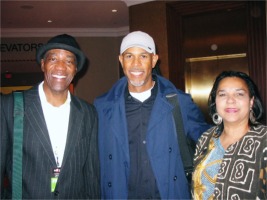 I spoke to Gail and she says there is video on YouTube somewhere of her dancing up a storm near the stage. (Uh, oh.) Jazz Sunday contributor Jonathan Turner also made the pilgrimage to the largest and arguably best free jazz festival in the world. And, Columbus jazz keyboard great *Bobby Floyd* made the scene. Floyd played a DJF-affiliated club gig in Detroit on Friday evening. Sunday night, Bobby and his wife hung out briefly with my better half, Alice Flowers, and me. I discovered I was a born jazz celebrity bloodhound, having earlier in the day wandered into saxophonists *Tia Fuller* and *Kirk Whalum*. When asked by Floyd, I instinctively helped Bobby find his way through hundreds of hotel lobby jam session attendees and find Floyd’s highly regarded jazz colleague and old friend, *Branford Marsalis* (see photo). Marsalis performed with his quartet on Labor Day afternoon.

Both Jonathan and I have attended over a dozen DJFs. We agreed that the 2010 festival was the best organized, most diverse (artist-wise) and musically rich festival of all the festivals we’ve been fortunate enough to see and hear. The entire event was a “Bright Moment,” to use Columbus’ own Rahsaan Roland Kirk’s famous phrase. Rahsaan’s widow, *Dorthaan Kirk*, a native Detroiter, was in attendance, by the way. The joyous news she shared with me backstage at Carhartt Amphitheater was that Rahsaan’s only child, *Rory Kirk*, will soon be a father for the first time. His wife, Monica, is expecting a baby girl. As I was writing this review, I telephoned Rory and found out that he and Monica have already to decided to name their daughter, Alena, in tribute to the recently departed jazz legend, Lena Horne. Talk about ending the Detroit Jazz Festival on a Bright Moment.

One final note: If Language Universal website visitors want to watch video of the 2010 Detroit International Jazz Festival, they can catch the re-run on DJF’s Jazz Planet.tv  The recorded video stream will be posted to the site until December 1, 2010.